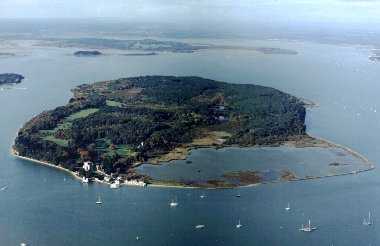 Brownsea Island—where it all began

So who is a "Scout"? The words "scout" and "scouting" are fairly broad terms that are used by many organizations. And there are non-Scouting organizations that include "scout-like" activities such as camping, hiking, and outdoor skills (some even wear a Scout-type uniform). For simplicity, I include in "Scouting" any organization that labels itself a Scouting program and which bases its program on Baden-Powell's Scouting concepts and ideals. I include both males and females in the definition of "Scout", and I include male-only, female-only, and coed associations in the definition of "Scouting". Note that there have been female Scouts since the earliest days of Scouting—female Scouts are often called Guides, and I include Guiding associations in world Scouting (Scouting and Guiding were both started by Baden-Powell).

There are quite a few individual Scout groups (especially in Germany) that operate their own local program independent of any national or regional association. These are difficult to find and track, and they can go into or out of existence when leadership changes. I don't attempt to list the unaffiliated single groups, and do not count them in the "organization" totals.

The international Scouting picture is complicated somewhat by the loss of the old distinction between a Scouting Movement for boys and a separate Scouting (or Guiding) Movement for girls. Since about 1970, the trend toward coed Scouting has accelerated, and today coed Scouting is the norm more often than not. This has created difficulties for the two largest international Scouting organizations: WOSM (World Organization of the Scout Movement), which formerly represented only male-only associations, and WAGGGS (World Association of Girl Guides and Girl Scouts), which formerly represented only female-only associations. Today, WOSM's membership is about 35% female (16 million), and it has changed its mission statements to reflect goals for "young people" rather than "boys and young men". WAGGGS still sets its mission goals in terms of "girls and young women", even though it counts a small number of boys and young men among its members (about 11 000). WOSM and WAGGGS have discussed the possibility of uniting, but this is highly unlikely. [The other international organizations are all coed, except that FSE requires that male and female youth be in separate units.]

Why isn't everybody in WOSM or WAGGGS? Those associations that prefer not to belong to WOSM or WAGGGS tend to share several viewpoints:

Click on the icons below for more information and a list of all member associations in each of the seven international Scouting organizations for youth and an eighth international organization for adults in over 60 countries. There are also links to a listing of all the non-aligned national Scouting associations that I have found, and to a page of 'Scout-like / Scouting Alternative' organizations. And finally, there are links below to our page showing the Scouting organizations in every country of the world, and to our page with pictures of the highest rank/award in many countries.

*—WOSM, WAGGGS, FSE, and WOIS provide an estimate of their total membership on their websites. I have found unofficial estimates on the Internet for WFIS, and I have made very approximate estimates for OWS and CES. I have also made a wild 'guesstimate' of the number of non-affiliated Scouts in the world. If anyone has better numbers, please let me know.

**—The 51 associations and 8 federations that belong to both WOSM and WAGGGS are counted in each group's total, but are counted only once for the grand total.

***—With a world population of about 7.8 billion (2021), and about 56 million in Scouting, that means that roughly one out of every 139 people on earth is directly involved in Scouting.

Relative Membership of the World Scout Organizations for Youth

WOSM (open)—Will recognize one national Scout organization per country; when there is more than one, they must create a single federation to represent them in WOSM (except Canada, where WOSM allows 2 separate national Scout organizations with no umbrella federation). Organizations can be male-only or coed. All members must "adhere to a Scout Promise and a Law reflecting ... the principles of Duty to God, Duty to others and Duty to self". Headquarters in Geneva, Switzerland, with the Secretary General's office in Kuala Lumpur, Malaysia.

WAGGGS (open)—Recognizes female-only programs, and often the female membership of coed organizations. "Girl Guiding/Girl Scouting is open to all girls and young women whatever their religion, ethnic group or background. A Girl Guide or Girl Scout accepts the Promise and the Law based on spiritual values, personal development and commitment to helping others." Headquarters in London, England, UK.

WFIS (open)—Open to any Scouting association that is not affiliated with another international organization. They require that member associations "follow, and use, B-P's original program, traditions, uniforms, morals, ethics, and structure as laid out in B-P's Scouting for Boys", amended only for "health, environmental, first-aid, and safety reasons". Headquarters in Heistenbach, Germany.

FSE (Christian-only, predominantly Roman Catholic; mostly in Europe [plus Canada & Mexico])—A Roman Catholic Scout organization recognized by the Holy See. "The International Union is composed of Catholic scouting associations. It acts and makes decisions according to the rules of this faith. However, with an open mind towards ecumenism, the International Union welcomes associations to other Christian confessions, in the conditions defined by the Religious Directory." Membership is thus Christian only, under Roman Catholic practices. Scouts from 'different confessions' (Catholic, Orthodox, Protestant) are not allowed to mix in the same group: "The intangible rule of the International Union is not to gather in the same group youths of different confessions, in order to avoid in their minds any risk of relativism or scepticism." Male and female youth must be in separate units. Headquarters in Château-Landon, France.

WOIS (open)—Open to any independent Scouting association that agrees with their Scouting philosophy, which is basically similar to WFIS. I have not discovered why they split from WFIS. Headquarters in London, England, UK.

OWS (Christian-only; mostly in Europe & South America [plus Australia, Dominican Republic, Jamaica, & Mexico])—The OWS constitution requires that all members "demonstrate by teaching and example of life the Christian Faith". The policies of the BBS (British Boy Scouts), the founding member of the order, presumably reflect OWS policy: "The Association is first and foremost a Christian organisation and seeks to serve the Christian Church as a means of advancement of the Christian Faith." The BBS defines 'Christian' as a person "who can accept the ecumenical version of the Nicene Creed". Headquarters in Dorset, England, UK.

CES (open; mostly in Europe [plus Brazil])—CES split from FSE due to disagreements over religious philosophy. "CES stresses the European dimension of its Scouting program", and emphasizes that it is "open to all, without distinction of confessional [religious] or social origin." Headquarters in Brussels, Belgium.

Last Revision to This Page: 27 April 2022
Text copyright © 2001-22 by Troop 97 BSA
Images are either non-copyright or are copyright © their respective organizations