1st Edition cover artwork by Gordon Grant, line drawing of a Scout in front of a campsite waving his campaign hat, beckoning to the reader. Printings 1-3 had an olive drab background, and the 2nd printing reprint plus printings 4-10 had a maroon background. There apparently were also some "special" printings with orange or light green covers. All back covers were the same color as the front, with a First Class badge. 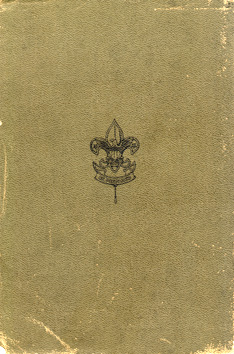 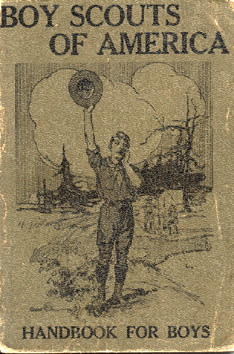 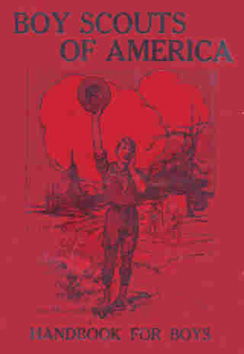 2nd Edition cover artwork (below) by J. C. Leyendecker, painting of a pair of Scouts (wearing red neckerchiefs) signaling in semaphore. The original picture was a Saturday Evening Post magazine cover (donated to the BSA) and had the Scouts using Morse code flags to send a non-existent semaphore letter. In 1916, BSA artists reversed the painting, which changed the non-existent semaphore letter to an 'L', and also placed the patrol colors on the right shoulder. In 1921, BSA artists changed the Morse flags to semaphore, removed the diamond pattern from the top of the Scout's socks, and updated some of the equipment worn by the Scouts. This Edition's 27 printings use five different cover colors.

Back covers were the same color as the front cover. Through the 23rd printing, the back cover was blank; from the 24th printing on, the back cover had a United States Bicycle Tire ad. 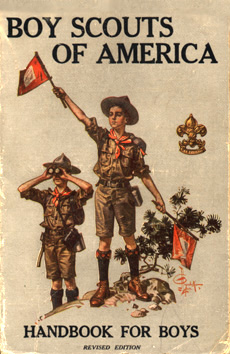 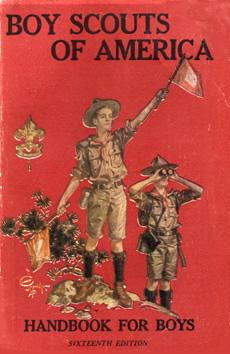 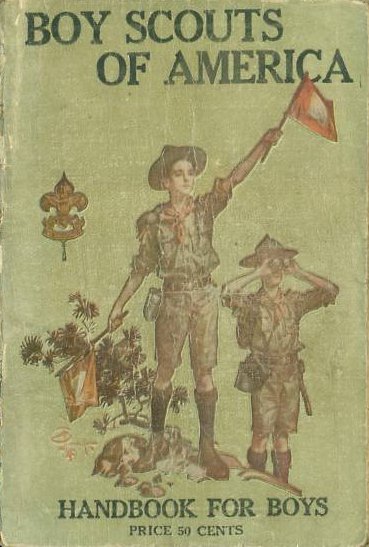 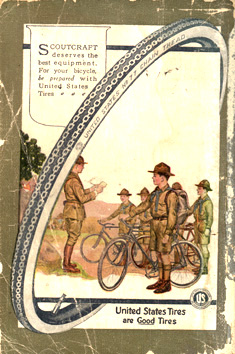 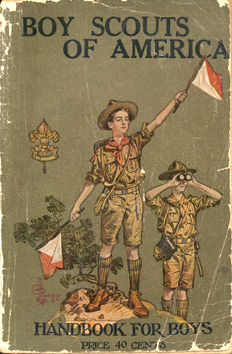 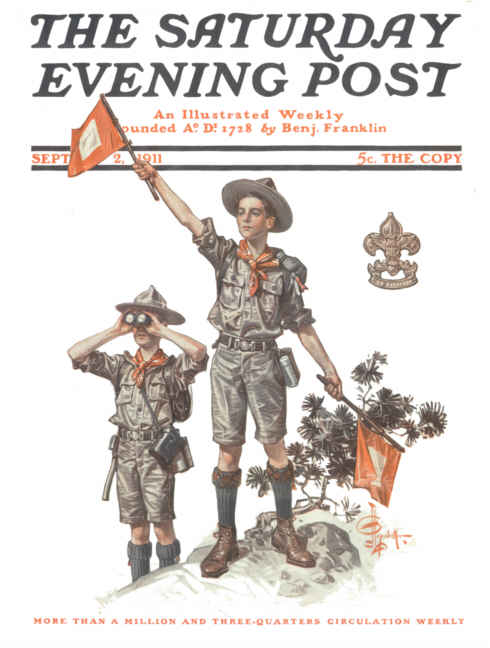 The 1st Edition reflected the newly-standardized American program. Although an improvement on the Original Edition, the 1st Edition contains many weak descriptions and errors, and it shows a lack of logical organization. Ernest Thompson Seton had expected to write the 1st Edition, but BSA's leadership preferred to put the book in the hands of an Editorial Board that more closely followed the developing BSA policies and practices.

The publicity surrounding the introduction of the new Handbook showed the effective promotional skills of Chief Scout Executive West. In June, 1911, he took the unprecedented step of sending out 4500 proof copies to educators for comment. Since the Handbook was published two months later, it is doubtful that the BSA received any significant amount of feedback in time to change the galleys, but the exercise was effective in promoting the book and the young Scouting organization.

Comparing a number of printings of these two editions shows the long-time BSA policy of making gradual revisions, corrections, additions, and deletions. The successive printings change only gradually; at no time can one say that a major change has occurred. Many changes were made with printing 11 (1914), but the greatest change in content occurred with printing 14 (1916), when all of the many sections written by BSA co-founder Ernest Thompson Seton were removed. (The subjects remained in the Handbook, usually in the same order and with the same chapter titles; they were rewritten by different authors.)

The 1st Edition omits a number of standard Scouting topics: map & compass, conservation, poison plants, knife & axe, description of troop leader positions, the Scout Handclasp, when to wear the uniform. All of these were added in the 2nd Edition. The omission of knife and axe seems particularly careless since the Handbook lists proper use of knife and axe as a Second Class requirement. Although Seton's Original Edition had recommended the international left-handed Scout handclasp invented by Baden-Powell, the BSA chose to invent their own (left handed, but with three fingers instead of the full hand), which the 2nd Edition shows. [The BSA did not change to the international handclasp until 1972.]

Although poisonous snakebites in the US are rare and seldom fatal (many more people die from bee stings each year), the Scout Handbook has always discussed their treatment. The 1st and 2nd Editions contain two separate and contradictory treatments, one in the section describing reptiles and the other in the first aid section (each section was written by a different expert). Both explanations are vaguely written, and the recommended treatments were probably more dangerous to the victim than the actual bite.

Both editions evidence considerable carelessness in preparation, and most of the problems were never corrected through 42 printings over 16 years. One example is the contradictory treatments for poisonous snakebite. Another is contradictory information about coffee. The index has two references under coffee. One tells the Scout not to drink coffee at all ("Growing boys especially should have nothing to do with tea, coffee, or any stimulant") while the other tells the Scout exactly how to prepare coffee while out on the trail.

The US history section contains several factual errors about the Mexican War. One date is wrong by a year, the books stretch the war from two years to three, and the sequence of key war events is reversed.

Throughout these editions, the editors seem to have paid scant attention to any logical sequencing or arrangement of the subjects, and they exercised little editorial control over individual authors. For example, the books cover first aid skills in a haphazard order, with minor and major problems intermixed. Perhaps this general carelessness is best summed up by looking at the most obvious part of the 2nd Edition, the cover. The original Leyendecker painting (which first appeared as a Saturday Evening Post cover) contains several errors. The Scout is sending a non-existent semaphore letter (of the 28 possible semaphore arm positions, Leyendecker had the bad luck to pick one of only two that do not signify a letter in English-language semaphore). Also, the Scouts' patrol colors are on the wrong sleeve, the Scout badge is missing the knot hanging from the scroll, and the signal flags are Morse rather than semaphore flags. After five printings, the BSA corrected all but the last error in 1916 by the expedient of reversing the picture (even though this meant the Scouts' shirts and flies would be buttoned backwards). The Morse flags were changed to semaphore in 1921, after 14 printings.

Early printings taught a Scout not only how to build a radio receiver, but also how to make a sending unit (radio was an exciting new invention at this time). The 1st Edition contains instructions on how to find one's latitude using the North Star. Unfortunately, even an adult would have difficulty following the explanation (written by Seton) found in early printings; it is sloppy writing and takes too much for granted. Later printings contain a much improved explanation by a different author. On the other hand, Seton's discussion of wild animals is much more modern and neutral than that of his conservation successor, William Hornaday. Although Hornaday was in the forefront of the conservation movement in his day and advocated absolute protection for "valuable" animals, he showed a disregard for the potential extinction of "pest" animals. For example, he refers to the coyote as a "petty thief" and writes that "the Coyote simply will not give up, and so the war upon him must be unceasing." Hornaday also condoned the extermination of the gray wolf.

Under "Outdoor Athletic Standards" in the 1st Edition, the books gives recommendations for standards in various events, based on a boy's weight (a boy under 125 pounds should be able to do 13 pushups and run 100 yards in 13 seconds). It is a little amusing that the book recommends that boys under 110 pounds "should not attempt" the 100-yard dash, and that boys under 90 pounds "should not attempt" pushups either.

Combined Total for 1st/2nd Editions
As evidenced by the continuous numbering of the official printings, these two "Editions" are truly a single book.