Girl Scouts of the USA
Girls in the BSA

Here's a little additional information & history about Troop 97's local Council. The new Adventure West name recognizes the May 2021 merger of Longs Peak Council (Greeley, CO) and Greater Wyoming Council (Casper, WY). For administrative purposes, most councils sub-divide their territory into several geographic "districts". As of May 2022 the Council has seven districts. The combined Council is geographically large, although much of the Council territory is lightly populated. The Council now covers 10 northern/northeastern Colorado counties, 12 Nebraska panhandle counties, plus almost 16 of Wyoming's 23 counties (the Yellowstone National Park section of Park county is in the Montana Council).

The brief information below gives some idea of the complexity of the history of most Councils. The ever-expanding current Council dates from a 1928 three-Council merger, with only two major additions since then. [Number shown is the official BSA-assigned Council number. Town listed is the official Council headquarters, though Councils typically covered a much wider area.]

Colorado Portion of the Council

Wyoming Portion of the Council

Nebraska Portion of the Council 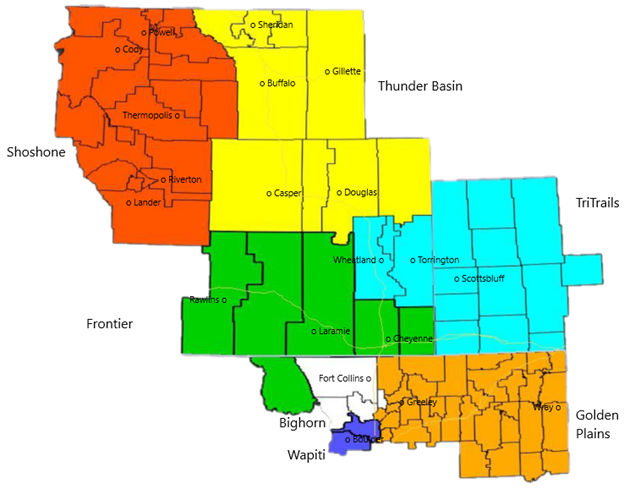